In this blog I will discuss different grading systems and how we grade the routes and problems at Alter Rock. Then think whether grades get in the way of your enjoyment of a climb and can act as a mental block. At the end of the day grades are only there as a guideline and you should enjoy your climbing regardless of what grade you are attempting.

This is a very emotive subject. Most of us, but not all, like chasing grades because we want to be seen as hard climbers and that we can hold our own when we are asked what grade we climb at.

Grades are very complicated, with different countries having their own grading systems which they then try and compare with each others systems. But for indoor climbing generally the French/Spanish sport climbing grading system is used.

At Alter Rock we have decided to use a simple tagging system for the bouldering grades, Very Easy, Easy, Hard and Very Hard. This can be crossed over into V grades.

In the outdoor world famous climbs get repeated by many climbers who have an input on what grade it should be compared to other established climbs. This can take many months to achieve a consensus or even years. Indoors the setter sets the route with an idea what sort of grade he is trying to achieve, tests it once on a top rope gives it a grade and walks away leaving it for the customers to try. Routes generally stay set at Alter Rock between 12 to 16 weeks before they are removed and replaced. This makes the argument about what grade it is a bit pointless as it is not there forever. 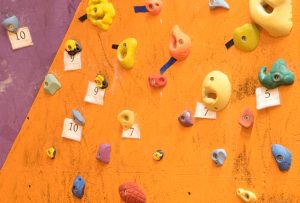 Grades are there to ensure you have a nice time and from an outdoor point of view to ensure you do not end up in a position that may potentially hurt you or even worse.

Grades do have a physiological  effect on the climber. Often we look at the grade and think or even say “I can’t climb that it’s too hard”. And that’s it we don’t even try, and if we do its a half-hearted attempted because we have already told ourselves we can’t do it.

All climbers have different abilities and different styles of climbing because they choose to climb different routes on different rock, cracks, overhangs, short routes, long routes, grit, sandstone, limestone, slate, sport and trad, the list is endless and because Alter Rock  uses a variety of setters there is always a variety of climbs and along with it a variety of grade which may not be consistent.

The only way to have grading consistent throughout the centre is to have 1 person climb them all, but 1 person’s 6a could be another person’s 6b or 5+. They could be tall or short, on form or not on form. The route could be set in the really nice crimps they like or with the horrible rounded holds they don’t like, or it could be on the slab where friction and balance are key or through the stepped over hang where big powerful arms are required.

And there’s the problem; we are all different.

Perhaps the next time you do a climb that you think should have been easy for you perhaps just reflect, maybe you are tired, did you miss that secret hold around the corner, is it because you don’t like those holds and likewise when you climb something that’s graded really hard and you make easy work just accept that you are having a good day and really you are a good climber when all the dice are stacked in your favour.

The grade is only someones opinion and likewise you can have your opinion. In any case the grade won’t be far out, hopefully. Above all what ever you are climbing enjoy it regardless of its grade.